Proud of Our Playoff Partners 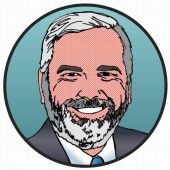 Kevin is Team 6098's lead mentor. He is a volunteer at BICS where he also teaches the Programming & Robotics class. He retired in 2015 from Latham & Watkins LLP where he was a partner in the firm's Corporate Department with a practice that focused on technology and the law, including information security, IT contracting and FCC licensed communications systems. He was a total geek in high school. Along with his coaching duties at bIrobot, he serves on the boards of the Northern Michigan University Foundation, Northern Initiatives (a CDFI), the Beaver Island Association and the Preservation Association of Beaver Island. He is one of the founders of WVBI, Beaver Island's community radio station. He earned a B.S. from Northern Michigan University and a J.D. from Pepperdine University School of Law. He is an (ISC)2 C.I.S.S.P.

One Week Into Build Season

This site uses Akismet to reduce spam. Learn how your comment data is processed.

There are no upcoming events.

We thank all of our sponsors at all levels for their support Every donation is important. We recognize our major donors below.